La Galère focuses on the strong bonds of friendship that will enable Steff, Claude, Mimi and Isa to make it through hard times.

SECTIONS ON THIS PAGE

The Convergent Stream supports the creation of multi-platform Canadian productions. They must include content intended for distribution on at least two platforms, one of which must be television, and the other, a digital media platform. More specifically, through this stream the Canada Media Fund (CMF) enables the development and production of television shows and related digital media content in four underrepresented genres: drama, documentary, children’s and youth, and variety and performing arts. The required digital media components must comprise rich and substantial interactive content and can include games, rich interactive media such as web series, ebooks, and social media projects, for example. The Convergent Stream is designed to support access to Canadian-produced content, anytime, anywhere, on the device of the user’s choice.

The stream comprises a number of different programs and incentives designed to encourage the creation of content from all regions of Canada and in the variety of languages spoken by Canadians. The majority of funding in this stream is disbursed through the Performance Envelope Program.

English Drama received the greatest share of funding among the supported genres at 55.0%, with Children's & Youth at 21.8%, Documentary at 18.0%, and Variety & Performing arts at 5.2%. Children’s & Youth average budgets have increased to a four-year high in both English and French. English Drama has shown three years of stability at over $1.6M per hour. English Documentary is at around $320K per hour in 2012-2013 and 2013-2014. English Variety & Performing arts is volatile due to the appearance of big-budget competition series in 2011-2012 and 2013-2014.  English and French Drama and Diverse digital media components are the source of the $2.0M growth in funding from 2012-2013 to 2013-2014, which included $1.8M in Diverse digital media commitments. A total of $9.0M of English digital media funding came from the Convergent Digital Media Incentive (CDMI). Funding to English Documentary digital media components have continued to command the largest share of funding, at 35.7% of English commitments in 2013-2014. Documentary second screen component budgets totaled $9.2M.In the French market, Drama received 50.8% of overall French funding; Documentary was at 24.9%, Children's & Youth at 16.8%, and Variety & Performing arts at 7.5%. French drama reported a gain of $1.8M in funding over 2012-2013. Over the last three years, French Variety & Performing arts and Children’s & Youth showed growth in average budgets, rising to $225K and $158K per hour respectively this year. French digital media components received an injection of $4.4M in funds from CDMI. Aboriginal average television budgets have reached a four-year high of $192K per hour.

In 2013-2014, projects were deemed convergent if the television program met one of the following three conditions:

Digital Media as Second Platform trends by number of projects

While it varied by genre, broadcasters provided either the highest or second highest share of financing to English television projects, the highest rate of broadcaster financing being in Documentary at 39.8%. Overall, the CMF provided 25.7% of English production financing, the second highest contributor overall. Provincial tax credits and agency funding provided the third highest share of English production funding at 18.9% overall. Canadian distributors were significant contributors in English Drama (8.9%) and Children’s and Youth (9.3%). English producers provided a 5.8% investment in Drama but did not account for more than 2.4% in any other genre. Sponsors and crowdfunding (under “Other”) made sizable contributions to some documentary productions (0.9%).

Broadcasters contributed at a greater rate to French projects (41.7% overall) than to English projects, with the exception of Documentary.  French Documentary was the only genre in which the CMF contributed at a higher rate than broadcasters (37.4% vs. 27.9%). Overall, the CMF accounted for 27.2% of financing to French-language projects, the lowest CMF participation being 11.0% in the Variety & Performing Arts genre. Producers' investment was 1.7% of overall French-language production financing. A few Documentary projects received support from municipal governments (0.1%, under “Other”). 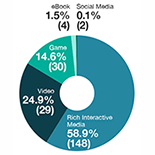